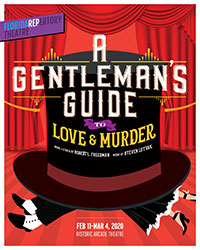 A Gentleman's Guide to Love and Murder

Getting away with murder has never been so fun! This Tony Award-winning BEST MUSICAL follows low-born Monty Narvarro, a distant heir to a family fortune who sets out to speed up the line of succession by using a great deal of charm – and a dash of murder! Can young Monty Navarro juggle his fiancée, his mistress, and knock off all of his relatives without being caught? Find out in this knock-em-dead and murderous musical romp!