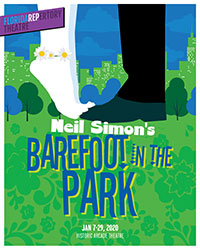 Barefoot in the Park

Florida Rep salutes one of America’s most beloved playwrights, the late Neil Simon, with this hilarious and touching romantic comedy! Simon’s multiple Tony-nominated play follows Paul and Corie Bratter, newlyweds in every sense of the word: he is a straight-laced attorney and she is a spontaneous free spirit always in search of the latest fad. Their new apartment is her most recent find – too expensive with bad plumbing and a skylight that snows. After a six-day honeymoon, they get a surprise visit from Corie’s loopy mother. The pair decide to to play matchmaker during a dinner with their eccentric neighbor-in-the-attic – where everything that could go wrong, does.